PrevPreviousSummer reading: The books we’re taking on holiday
NextMoving on to the next chapterNext

It’s not often that I’m ashamed to be British, but this week I hung my head at the way our press covered a certain news story and the social media savaging that followed. It was brutal.

In article after article, Meghan, HRH Duchess of Sussex was slammed for guest-editing the infamous September issue of British Vogue. She had been invited by editor Edward Enninful to star on its front cover but she declined, saying she felt it would be ‘boastful’. Instead, she decided to use the cover of an aspirational and internationally respected British women’s magazine to shine a light on women from around the world who are working hard to support others less fortunate than themselves.

The edition, entitled Forces For Change featured a front cover filled with what Vogue called “brilliant female change makers who are set to re-shape society in radical and positive ways”.

Now, clearly not everyone was going to agree with who should or shouldn’t be featured in such a provocative edition, and I’m sure the seven months it took to put together included long debates, to-ing and fro-ing over lists and suggestions until it was finally agreed, but, the anger! The bitchiness! The vitriol! The headlines I’ve seen included:

In January, HRH The Duchess of Sussex @SussexRoyal was appointed Royal Patron of @SmartWorksCharity, an organisation that aims to provide clothes and coaching – and a large dose of self-belief – to unemployed women in need. Click the link in bio to read the piece, originally penned by The #DuchessofSussex for the September 2019 #ForcesForChange issue, in which she shares a new initiative designed to foster a sense of community.

I thought about Meghan yesterday as she announced the launch of a clothing range for high street stores including Marks and Spencer and John Lewis and Partners, to raise money for Smart Works, a charity she is patron of. It’s a great idea; I know the charity well and support it myself, but the press decided to focus on the price of the clothes and shoes the Duchess wears, sniffily denouncing her ‘expensive taste’.

I wondered how she must have felt as she crawled into bed last night, after a week of blasting from all sides. Let’s take away the grumblings about an American actress marrying into our Royal Family and trying to do things ‘her way’. This is a young woman trying to make positive changes in the world and use her platform for good. At a time when the world feels like a very scary place, politically and environmentally, with rising crime, debt, mental illness in our lives and on our minds, why on earth are we slamming someone for trying to do something good?

The saying goes ‘You can’t please all of the people all of the time’ but Meghan Markle must be feeling this more keenly than most this week, and wondering why she bothers. Well Meghan, I think that like all the women we champion here, you are a girl on FIRE. Keep bothering. Keep going. You’re doing great.

2 thoughts on “Stop bashing Meghan: She’s a girl on fire!” 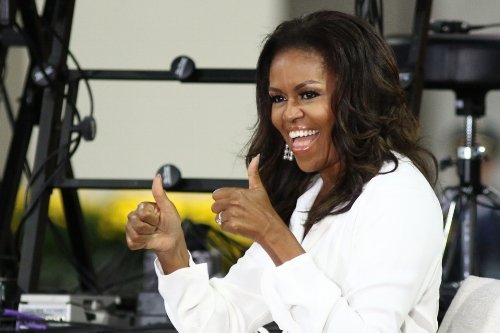 What would Michelle do?

Currently on a tour to promote her new memoir, Becoming, we’ve fallen in love with Michelle Obama all over again – and how to be a little more Michelle in our lives…